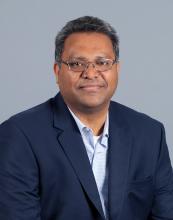 Sanjeev directs the R&D program for Everspin’s Spin-transfer Torque MRAM. The scope includes managing engineering groups to resource and execute on projects from technology definition to qualification, driving cross functional alignment across various departments, as well as manage joint development agreements for technology transfer and production. Prior to this role, he was VP, Manufacturing and Process at Everspin, where he was responsible for FAB operations managing the production of Toggle and Spin-transfer Torque MRAM.

Prior to Everspin, Sanjeev was senior member of the Technical Staff at Freescale Semiconductor and led a team responsible for development and integration of Toggle and Spin-Torque MRAM on CMOS. Before joining Freescale in 2006, Sanjeev was member Group Technical Staff at Texas Instruments where he played a lead role in the development and commercialization of ferroelectric memories. He received the Technical Excellence Award in recognition of his contributions to bringing ferroelectric memories from R&D to production. At University of Maryland, Sanjeev was a Research Professor, where his work was focused on correlating thin film deposition technique, microstructure and reliability of ferroelectric memory devices.

Sanjeev’s technical contributions has led to over 60 issued patents, more than 100 publications and numerous invited presentations. He graduated from Cornell University with a doctorate in Materials Science and Engineering in 1996..